Objects: BPL stock
Brower Propulsion Laboratory Official Stock Certificate: The Value of BPL Stock will never go down! Unencumbered by the legal strictures of incorporation or adherence to any laws of governance, save for its own, BPL shares represent an unvarnished view of the health of the company. In essence, you get what you pay for, an unprecedented phenomenon in American investment. Because of this innovation, just one of many to BPL's credit, Company profits will always increase, and investor risk never will. This worry - free kind of investment may indeed someday become the standard by which all American companies are judged. - $20.00 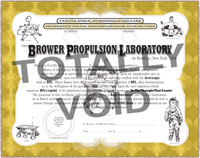 Objects: Touristic Art Trinkets (TAT)
Tourist painting, China style. Paintings generated by our outsourcing mission to China (BPL-002) have been pretty much sold out. Speaking of that, we would be happy to make you a 'fake' one, by having the same artist make another version of the original Chinese-Manufactured-American-Made imported art-sketches. Given that these potential new items are knock offs, the price per unit will be higher because the inentionality of the original project will be even more manifest than in the originals. And speaking of that, see more of them and get information on the mission at the mission page. - $200.00 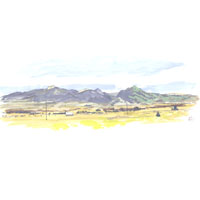 Objects: Recycled mugs
Brower Propulsion Laboratory recycled mug. Our logo cleverly sandblasted over, and indeed, into, some other corporation's promotional item. We are considering calling this gesture 'pre-purposing', as we are doing the same thing with the same object, only more so. - $20.00 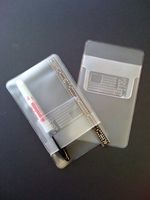 Objects: Apparel
Brower Propulsion Laboratory re- or pre-cycled t-shirt. Design, color and stains vary. We could even produce a brand new one for American Conformists. You get the BPL logo, with one of our popular slogans, such as 'ITS THE THOUGHT THAT COUNTS', 'THE WRONG STUFF', 'IT'S NOT ROCKET SCIENCE', 'FAILURE IS AN OPTION', or 'GOING NOW HERE FAST'. XL, White in stock, but we could be persuaded to generate one that is more aesthetically appealing, within reason. Indicate any preferences in the 'notes' section when you check out. - $25.00 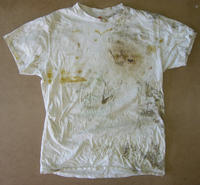 Objects: AAS
AAS (Art Application System) with bound documentation. This unique watercolor box is the actual prototype used to create the Touristic Art Trinkets (TATs) during BPL-002 Outsourcing Mission to China. It is offered here in anticipation of a limited production run, but in the meantime is still being used to generate TATs and Scout Paintings (We only have need for one around the lab). - $1,200.00

Objects: Lunar Geology Hammer
Developed along with other geology tools used by Conrad Carpenter, Underemployed Astronaut, before his demise. This is an accurate duplicate of the hammers used on the moon during later Apollo missions. They even weigh about the same. Hand machined by BPL's 1st Chair Mill Operator from aluminum. Comes with 'certificate of authenticity' and other official looking information. - $1,200.00

Objects: Stereo imagery
BPL is developing stereo cameras for imaging the Yellowstone environment during the -003 Moranic Mission to Montana. Five Commemorative cards bearing genuine spacecraft-observed phenomena and testing imagery arranged in stereo pairs will accompany our custom stereo viewer. The viewer even works with an iphone! - $70.00 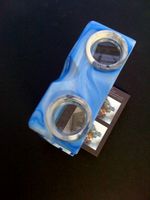 Objects: Stereo Photogram Card Subscription
BPL is developing stereo cameras for imaging the Yellowstone environment during the -003 Moranic Mission to Montana. We are producing several sets of 5 Photogram cards each, at intervals during mission operations. These stereo cards, printed on sturdy inert material, depict genuine spacecraft-observed phenomena and development highlights. They are made exclusively for use in our Viewer (#03-SV003). BPL is offering a year's subscription to the photo collections, which means you will receive all the stereo photos taken during a year's worth of operations. Since our viewer also works with an iphone, you may opt to receive these images electronically, to conserve paper waste and to waste electricity. - $100.00

Objects: Carl Sagan
Surplus busts of Carl Sagan generated by our Mystico-generative Office. These colorful effigies come in a variety of plastic and air bubble combinations and can be made into doorknobs, lamps, noserings, and marital aids (external use only). - $30.00 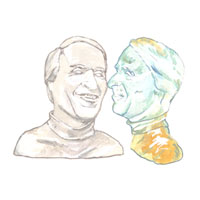 Objects: BPL RECYCLED ALUMINUM BOOTPRINT
You won't find these things anywhere else- During development of the BPL Metaliturgical Department, sand mold tests were conducted using the Lunar Overshoe from Conrad Carpenter's A7LB Space suit! You get an aluminum casting of the imprint left from the boot. Each of these is unique and bears the unmistakable characteristics of those footprints you see in the pictures from the moon in the 1960's and '70's. The boot was part of BPL's completely hand made Lunar Space Suit project. The aluminum is from actual defunct BPL equipment and manufacturing detritus, pulled from our immense pile of mistakes and miscalculations, and melted down in our Provisional Foundry. Image from 'proof of concept' model. - $130.00 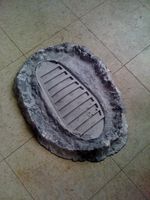 Objects: Rover
LIMPER (Limited Intelligence Marginally Produced Exploration Rover) Breadboard Prototype, BPL Serial # 03-S003-01. This is the original testing specimen for the LIMPER project to Cheaply Search for Life On Earth (C-SLOE). While still awesome, some of the expensive or broken equipment has been removed or cannibalized from the unit for other aerospace projects, which makes it totally 'green' due to recycling and de-toxifying. Price includes Vitrine and Limper Mission Press Kit. $1,000.00 s/h. - $9,000.00 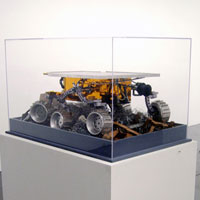 Objects: LEM
Surplus Equipment: Lunar Excursion Module, Ascent Stage. An early BPL exercise in profligate spending and documents tunneling, this exact replica of the vehicle that ferried astronauts to the moon and back to orbit now hangs at the Museum of Flight, in Seattle Washington. Gene Cernan, the last man to walk on the moon called it 'great,'. Read more about it and see images here. $75,000.00. $9,000.00 s/h - $84,000.00

Objects: Conrad Carpenter's Apollo A7LB Space Suit
Early BPL Research Project Result. Made between 1999 and 2007, this hand made replica of an Apollo era space suit was worn by the fictitious astronaut-handyman, Conrad Carpenter, until his unfortunate demise (while still wearing it) during the repair of a well. Read more about the suithere, and find out about the astronaut here - $15,000.00

"The AAS is a great value to us."
Steve Capman
Art Coordinator
ESA